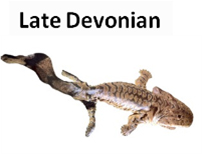 Over the past decade or so, a number of very early fossil tetrapods from the Devonian period have been described from around the world, and many showed some rather unexpected characteristics. Many of the specimens are rather fragmentary, but where known, they had internal gills, weak legs that could not support the body out of water, more than five digits per limb and fish-like tail fins, all characteristics which suggest they were fully or almost fully aquatic.

At the end of the Devonian period there was a mass-extinction event, after which there was, until recently, a gap of about 20 million years in the fossil record, with only two sites producing tetrapod fossils. Blue Beach in Nova Scotia yields many footprints and abundant, isolated bones, but we can’t tell very much from these on their own, and a single articulated tetrapod called Pederpes was found in the west of Scotland. This gap in the fossil record was called Romer’s Gap, after the American palaeontologist, Alfred Romer, who first pointed it out. At the end of that period, all the known tetrapods conform pretty much to the modern pattern of lungs and no gills, robust limbs with five or fewer digits and no fishy tail fins.

Recently, a number of sites that fall neatly into Romer’s Gap have been found in Northumberland and the Borders Region of Scotland, from which scientists have collected a wealth of fossils, not just tetrapods, but also fish, plants, crustacea and a scorpion. It now seems that the reason so little had been found was because there are no commercially exploitable resources in the rocks laid down during this period. No coal was formed until after the end of the Tournaisian, so nobody was looking at the rocks. With no-one looking, no fossils were found, which gave the erroneous impression there was nothing there, so there would be no point looking. A self-fulfilling prophecy!

The TW:eed Project is studying not just the tetrapods, but also the fish, plants and invertebrates, the environments in which the organisms lived and the way they evolved from the survivors of the extinction event to the relatively modern-looking animals that we see later in the Carboniferous.

The TW:eed “flag” at the top left of each page was designed by Jenny Clack. The background colours are from the BGS geological map of the area, the pink being Devonian Old Red Sandstone, the darker blue being the Tournaisian Ballagan Formation, which is the time we’re interested in, and the paler blue being the Viséan Fell Sandstone Formation, by which stage we find tetrapods conforming much more to the modern pattern.