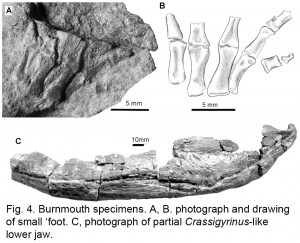 In the last decade or so, many taxa of Devonian tetrapod have been discovered from sites around the world.

Where known, their morphology suggests they were primarily aquatic, with little, if any capabiliity for life on land. Their limbs were small, weak and polydactylous, with up to eight digits on each foot, they had functional internal gills and they had fish-like tail fins.

Following Romer’s Gap, the tetrapod taxa that have been found include clearly terrestrial pentadactylous forms, including small forms that resemble amniotes. The intervening interval encompasses one of the most important evolutionary developments in vertebrate biology – how and when tetrapods achieved terrestriality – but, apart from two localities which have yielded minimal information, it remains entirely undocumented in the fossil record.

Contemporary vertebrate faunas worldwide underwent radical changes in this interval, during which ecological systems and faunal associations more like those of today were established, yet we know virtually nothing about this process. 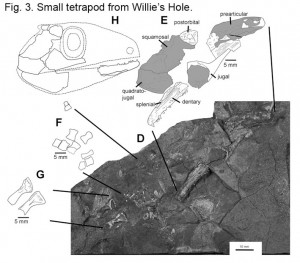 Thanks to Tim Smithson and the late Stan Wood, we now have numerous tetrapod, fish, arthropod and plant specimens from a number of Lower Carboniferous sites in the Borders Region and Northumberland. We are studying these in detail and will be mounting field expeditions to collect more.

A new borehole core and the work of the other teams is helping us to understand the evolution of these animals as they took the critical steps from being entirely aquatic to fully terrestrial, to put that knowledge into its ecological context, to clarify the sequence of events through time and to understand the wider environmental influences acting upon them at that time.

The Palaeontological Framework is based in Cambridge, but everyone contributes to this component of the project.