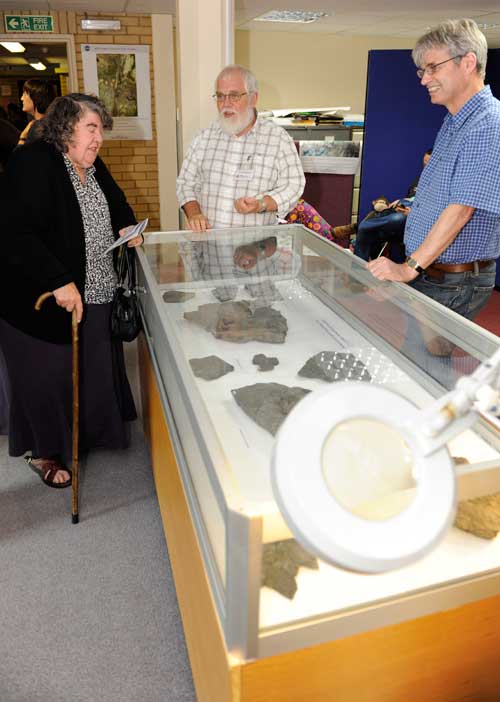 On Saturday, 22nd September, 2012, the British Geological Survey’s (BGS) office in Edinburgh was opened to the public as part of Edinburgh Doors Open Day. This event, held annually, had the theme of “hidden treasures”. There were plenty of these to seek out as the BGS was packed with Earth science demonstrations, talks, experiments and displays of work undertaken at home and abroad. There were lots of hands-on activities to interest people of all ages, some 750 of whom came through the doors.

TW:eed Project members Nick Fraser (National Museums of Scotland) and Dave Millward (BGS) were on hand to talk about the display of fossils collected by Stan Wood from the Scottish Borders. These are just a few of the many specimens already collected and which would form the heart of our investigations. An accompanying poster explained the significance of Romer’s Gap and set the context for these extraordinary and unique finds. The exhibition included not only tetrapod material but also examples of fish, shrimps, millipedes and a scorpion.

The display attracted a lot of interest and questions from visitors, including some from the Borders area. Offers of help were gratefully received and many indicated that they would be back next year for an update! Copies of the project newsletter were given out along with information on how to find the Project Blog.