I may split this into several pages later in the year, depending on how much there is to report. Right now, it’s not much!

We wanted to take advantage of the extra low tides you get around the spring equinox, so Tim Smithson booked a self-catering cottage on a farm a bit west of Berwick upon Tweed for the week of 16th – 23rd March. Before we went, the weather forecasts told us we were going to be cold, so we packed our thermals! Four of us went up from Cambridge: Jenny and Rob Clack and Jenny’s PDRA Tim Smithson and her PhD student, Ket Smithson.

And it was windy and cold the whole week, with snow flurries every day, though to be fair, there was the odd sunny afternoon when it wasn’t too evil, but we were not as strong as we might have been, and I’m afraid some of us wimped out a few times.

On the Monday we met officials from Scottish Natural Heritage, to whom Tim explained what we were planning to do, and as far as I could tell, they seemed content that we are not planning to destroy Scotland’s heritage.

Sarah Davies and Janet Sherwin came up from the University of Leicester and on the Tuesday Tim took them, along with Dave Millward from the British Geological Survey in Edinburgh, to the site in Coquetdale where he had found a large actinopterygian fish jaw. Janet started an MPhil studying the sediments there later that year, and it was the first time those three had visited the locality. Although the weather was foul where we were staying, it was apparently quite sheltered in Coquetdale, so they had quite a nice day. 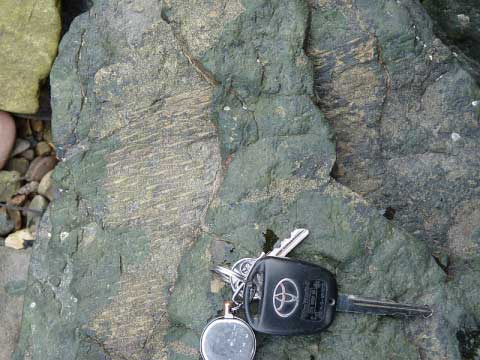 The rest of the week was largely spent on the foreshore at Burnmouth, but it wasn’t particularly productive. Not only was it freezing cold, but with a low pressure weather system over the country and a stiff on-shore breeze, the tide didn’t go nearly as far out as we needed. Many of the rocks we were interested in stayed under several feet of water, and there was no way to collect from them. That was very disappointing as we’d only gone there that week because of the supposed low tides!

Tim and Ket have found more exposures of a bed that has yielded numerous isolated bones, especially rhizodont fish, but they did limited collecting on this occasion.

We also spent some time ranging across the large expanse of rocks that are exposed in front of the village breakwater, finding odd bits of plant material, all of which will contribute to our overall understanding of what’s going on in the rocks. Jenny was particularly pleased to find the impression of a section of Lepidodendron bark.

There were eight of us staying in the same cottage as we’d rented in March. Jenny and Rob Clack, with Ket Smithson and Tim Smithson from Cambridge, Sarah Davies, Carys Bennett and Janet Sherwin from Leicester, and John Marshall from Southampton.

On the Tuesday afternoon, Nick Fraser, Andy Ross and Stig Walsh from the NMS and Dave Millward, Mike Brown and Tim Kearsey from BGS all came down from Edinburgh, as did Maggie Wood from Selkirk, for a team meeting in which each team reported on their progress over the previous 6 months. It was fascinating, and a summary was included in Newsletter No 4. If you’re not on the distribution list, you’ll be able to download it from the Downloads page of this site. 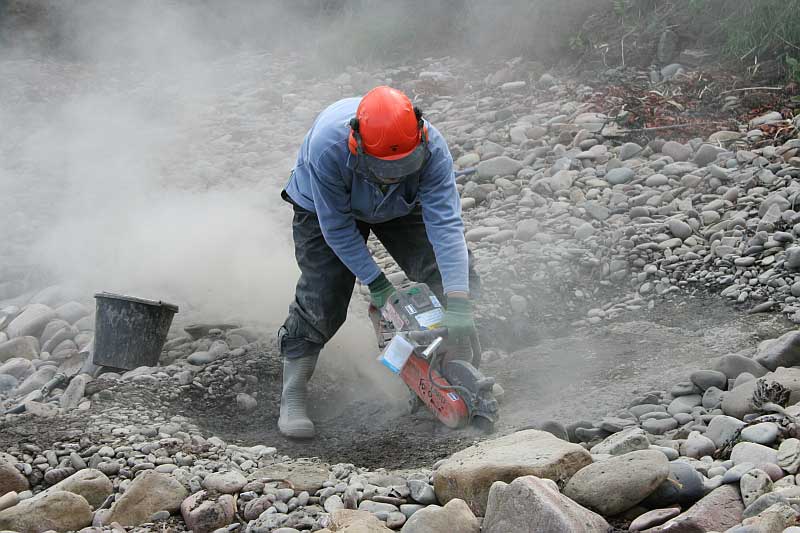 Tim Smithson’s main objective for the week was to extract a metre-square section of what’s provisionally known as Tim’s Bed in Burnmouth. This bed has yielded abundant tetrapod, rhizodont and lungfish bones and Tim wanted to do some detailed analysis of it in the lab in Cambridge. He and several others spent quite a while removing the shingle that had appeared where he wanted to remove his sample. Two days after he’d finished, the tides had put it all back and you couldn’t see where he’d been.

Jenny and Rob Clack collected two large bones from higher up the sequence. One is a very large lungfish opercular bone, perhaps 20cm in diameter. The other we’re not sure of just yet. Ket has been reassembling the pieces we came away with (the bones are very badly cracked and simply impossible to extract from the cliff intact) and our current thinking is that it’s a rhizodont clavicle.

Tim Kearsey and Carys Bennett logged the bedding at a new site on the River Whiteadder, near Duns, and Jenny and Rob tagged along just to take a look at the site. At the foot of a small cliff, they found several small loose blocks containing rhizodont bones and a couple of lungfish toothplates, and they also determined where in the cliff the fossils had been eroding out. It was impossible to extract the bones from the cliff as they were too friable, and in any case, they would have needed permission from the landowner to do that, so they’re planning a return trip later in the year.