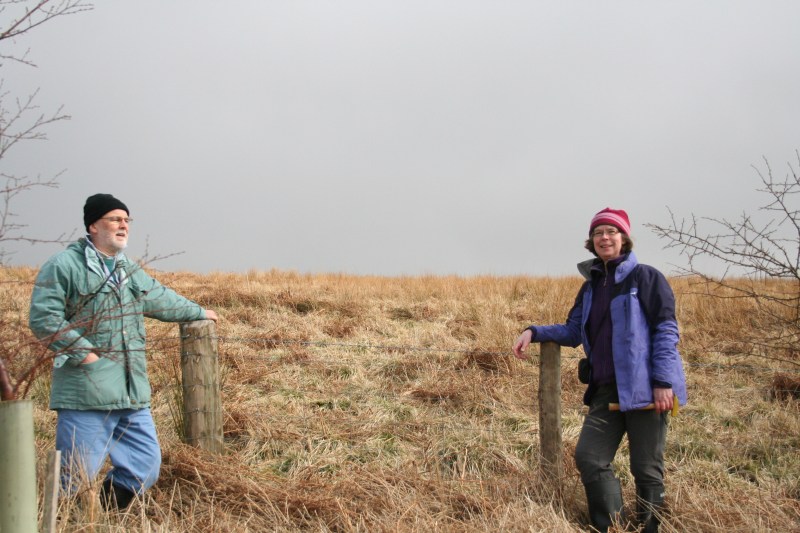 As the clocks went forward at the end of March, Kelly Richards, Janet Sherwin and Tim Smithson began a week of fieldwork in the Scottish Borders. Despite damp and dreary weather, they discovered three new horizons containing shark teeth and found the first conclusive evidence of marine incursions in the Ballagan Formation.

Staying with Maggie Wood in Selkirk, they concentrated their searches in the banks of the Whitrope and Roughley Burns where Stan Wood had first collected in 2006. They relocated Stan's original bone bed horizon but left it intact for future visitors to see. Janet logged the section and collected palynological samples to help establish the position of the bone bed within the Ballagan Formation. 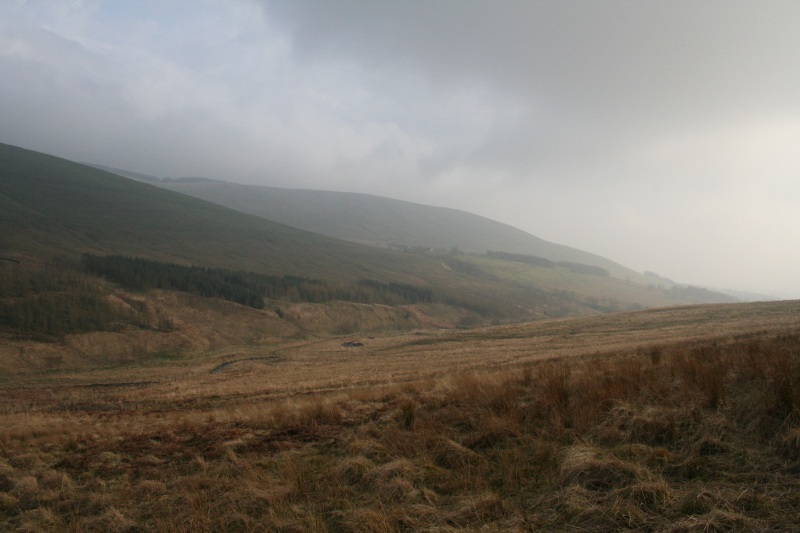 On the day they were joined by parties from the BGS and NMS, when for a while it seemed like there were more geologists on the fells than sheep, Kelly discovered a new horizon in Whitrope Burn containing both crinoids and bradyodont shark teeth. This is the first record of truly marine fossils in the Ballagan and it came as a bit of a surprise to Dave Millward and Mike Browne, as they're very familiar with the geology around there.

Janet and Kelly also spent a couple of days in Coquetdale and found shark teeth in another new horizon below where Tim had found them in 2011. Janet extended her logging of the Coquetdale section to incorporate an extensive plant horizon and the mudstone beds where lungfish tooth plates had been found. 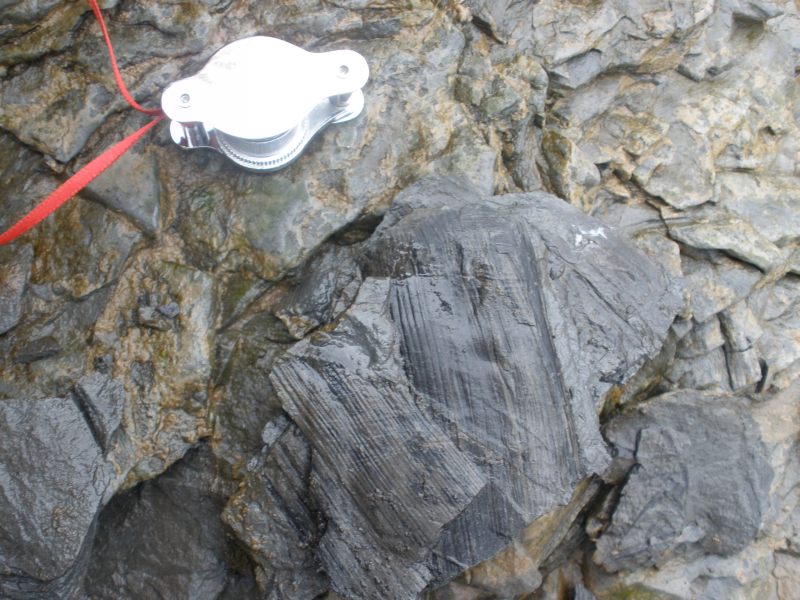 The specimens collected during the trip, together with bone bed material collected by Jenny and Tim with Stan in 2006, will be prepared by Becky Bennion during the summer vacation. Becky has been awarded a John Ray Trust Summer Project Grant to help with the preparation and analysis of the diverse shark fauna from the Borders. 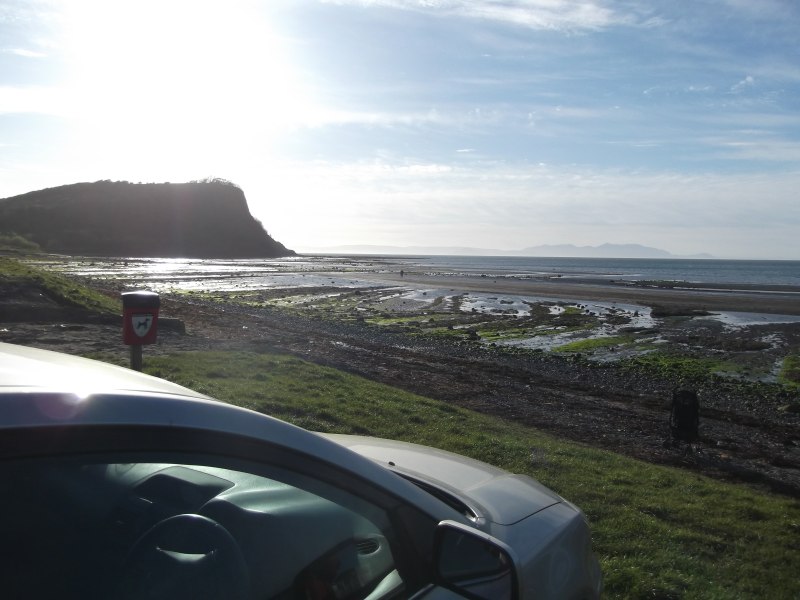 Early in April, Jenny and Rob Clack went to Stockholm, where Jenny had been made an Honorary Foreign Member of the Royal Swedish Academy of Sciences. This was a great honour and she is justifiably proud of her membership. The Academy awards Nobel Prizes for Physics and Chemistry, so this is exalted company!

Later in April, Jenny and Rob went to Ayrshire on the west coast of Scotland for a few days. There are Ballagan Formation rocks cropping out there, the same as the ones we collect fossils from on the east coast, and they wanted to explore the area to see if there was anything there to be found. There are similarities in Ayr to the beds at Burnmouth, with mudstones, siltstones and cementstones, but the latter are thinner in the west, and there are none of the massive sandstone layers you get in the east. The tides were not good, but that was the only window they had available for the trip, so they just had to do the best they could. 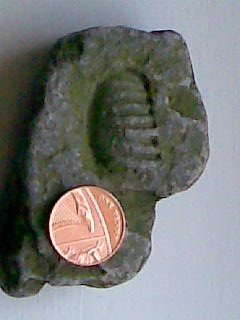 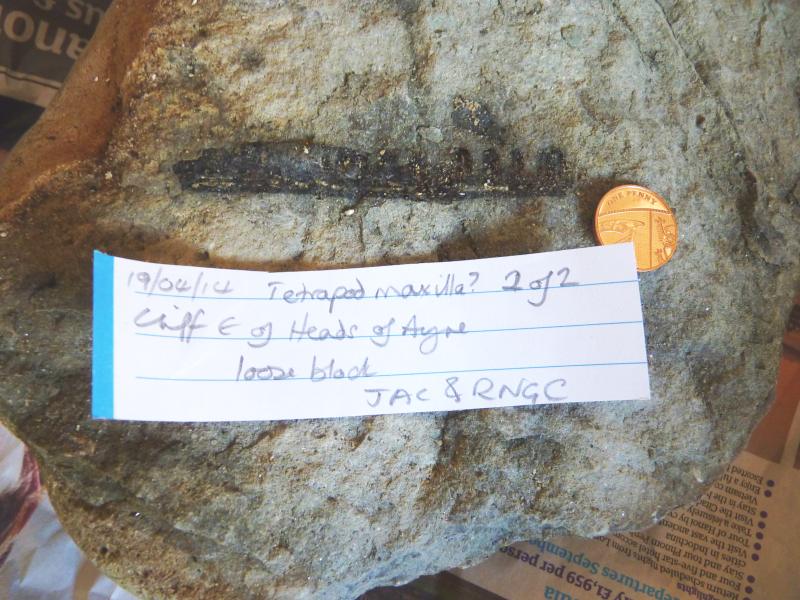 As a result of the tides, they weren't able to spend as long as they'd have liked searching, and didn't find that much, although the natural mould of a lungfish toothplate and a tetrapod maxilla (upper jaw) made the whole trip worth the effort.

Having found some decent accommodation and a friendly pub selling excellent food, they are planning to return some time when the tides are more cooperative! 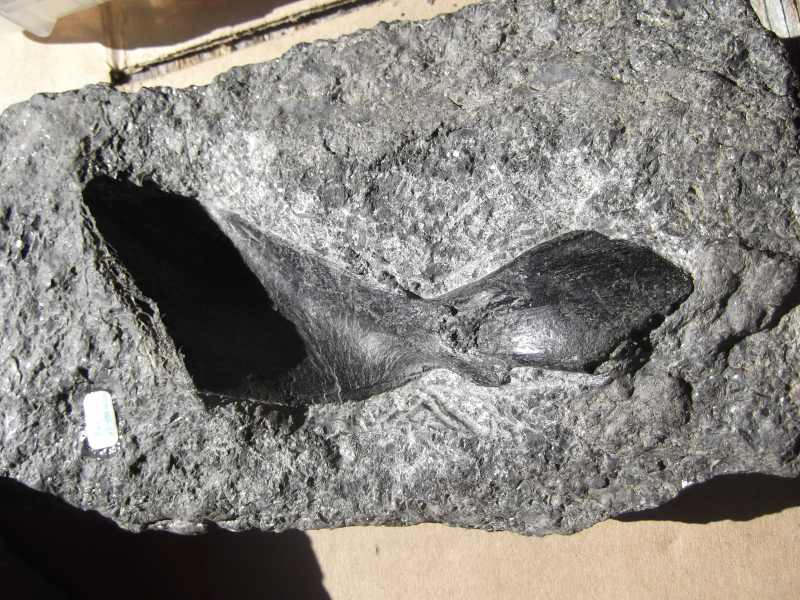 In early May, Jenny and Rob Clack, and Tim Smithson, flew over to Canada. They spent a couple of days in the Redpath Museum at McGill University in Montreal, looking at the collection of fossils from Horton Bluff, Nova Scotia. These are the same age as those from Northumberland and the Borders Region of Scotland, having been laid down when Europe and North America were close together and located just south of the equator. People have been collecting fossils from Horton Bluff for decades, but almost all the specimens are of isolated bones, making it very hard to associate them with each other. There are lots of tetrapod femora (thigh bones) and humeri (upper arm bones), for example, but no way to link them together. Jenny and Tim spent two solid days studying, photographing and drawing them. 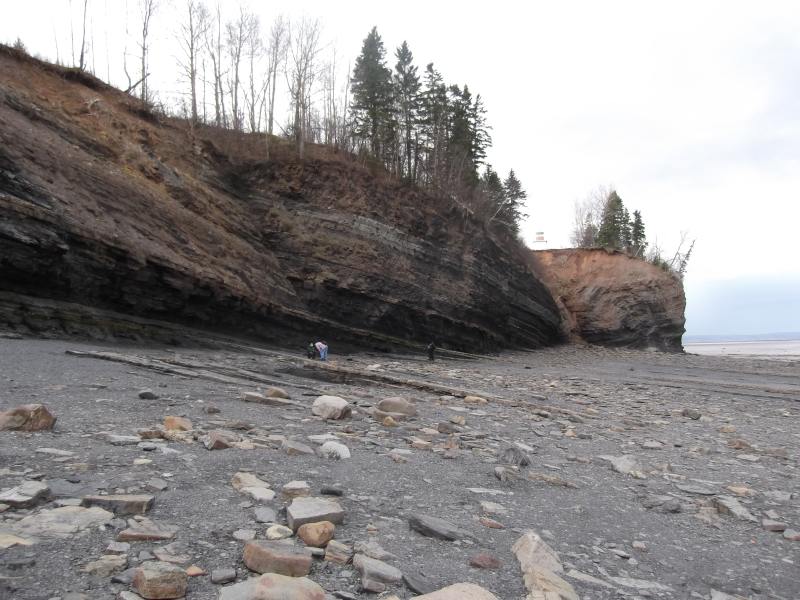 From Montreal, they went to the Blue Beach Fossil Museum in Nova Scotia, where they met up with one of our Canadian partners, Jason Anderson, from the University of Calgary. Horton Bluff is the area, but Blue Beach is the actual strip of coast where the fossils have been found. Chris Mansky and Sonja Wood run the museum. Chris has been collecting fossils from the beach for over a decade, and has amassed a huge collection, not only of tetrapod bones, but also rhizodont (lobe-finned fishes), actinopterygian (ray-finned fishes) and lungfish bones, together with many plant fossils and numerous trackways. 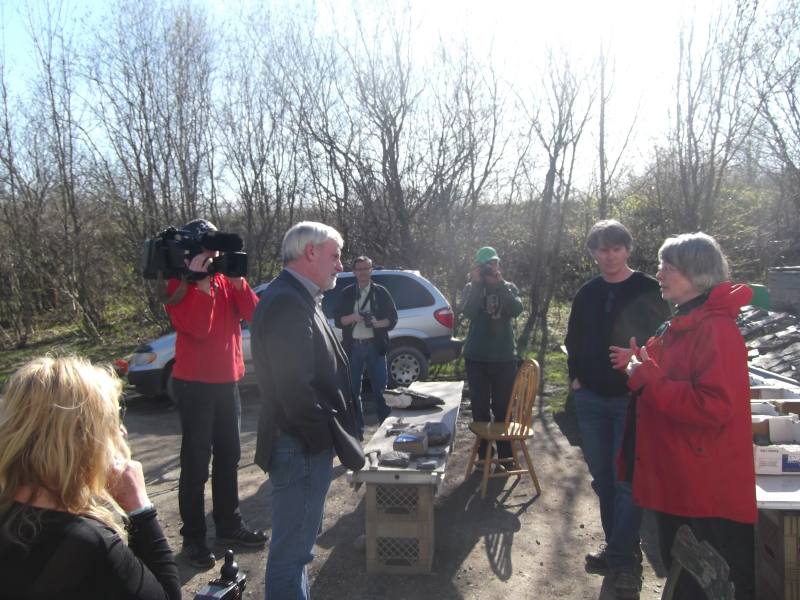 A film crew from the Canadian Broadcasting Corporation, making a documentary about the museum, greeted us when we arrived. Jenny had forewarned Tim and Jason, so it didn't come as a shock! They were there much of the time, but were not generally too much of an interference. They did get Jenny, Tim and Jason to talk to camera and do various things like packing specimens into boxes, and filmed them arrive and leave, as you'd expect. In the photo on the left, Sonja is on the extreme left, Chris in the middle and Jason to Jenny's right.

From Blue Beach, we drove to Halifax, where Jenny and Tim spend a couple of days examining Horton Bluff material housed in the Nova Scotia Museum. Our main partner there, Deborah Skilliter, was away, but they were ably assisted by her colleague, Katherine Ogden.