The Leicester team is working with John Marshall at the University of Southampton on the Sedimentological and Palynological Frameworks, which will feed into Stratigraphical and Palaeontological Frameworks with environmental and climate data, as well as the dating of localities where specimens have been found. 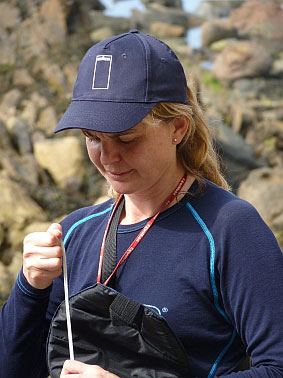 Sarah Davies is Professor of Sedimentology at the University of Leicester. She has over 20 years experience and numerous publications in clastic sedimentology and sequence stratigraphy. In 2007 she received the British Sedimentological Resesarch Group Roland Goldring Award for noteworthy published research in any field of sedimentology. She leads a research group which provides expertise in the fields of downhole logging, core petrophysics and core-log integration to the Integrated Ocean Drilling Programm (IODP) expeditions for the global research community. In 2015, Sarah was awarded the Geological Society's Coke Medal for her exceptional contribution to geology. 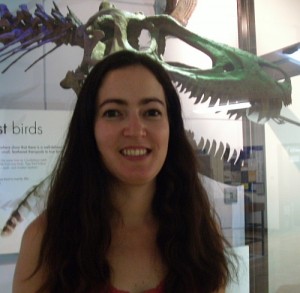 Carys Bennett is interested in palaeoclimate and fossils, and is an ostracod specialist, with experience of Carboniferous sedimentology, macro- and micro-faunas, palynology and geochemistry. One of the main findings of a recent study of non-marine ostracods which she carried out was the potential use of ostracod shell geochemistry as a palaeoclimatic indicator.

In the first year of the project, Carys has done extensive logging and sampling of the rocks of the Ballagan Formation, particularly at Burnmouth, but also at numerous other sites in the region. 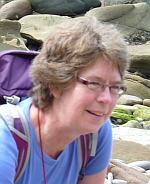 Janet Sherwin uses optical and electron microscopy, and petrographic analysis to understand the processes of deposition, and depositional environments, particularly of fine-grained sediments.

Janet is particularly interested in the sediments exposed at Coquetdale. She is studying for an MPhil.

In academic year 2016-2017, a University of Leicester masters student will be working on a project as part of the TW:eed consortium research. 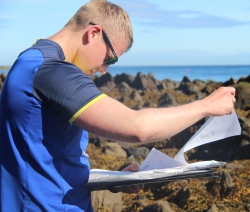 Peter Wooldridge is reading for a degree in geology. Peter's Masters Project is entitled “Early Carboniferous Fluvial Architecture”. Supervised by Sarah Davis, Carys Bennett (University of Leicester) and Tim Kearsey (BGS), the project aims to resolve and explain the rapidly evolving fluvial architecture of the Early Carboniferous strata exposed within the Burnmouth succession.