We are investigating the conditions in which the tetrapods and other fauna lived and died, and how the Early Carboniferous depositional environments in south-eastern Scotland contributed to the preferential preservation of early tetrapods. Many of the key tetrapod finds are in fine-grained layers within the Ballagan Formation. From previous research we know that the formation represents an extensive low relief, muddy, vegetated floodplain, traversed by numerous river systems, surrounding mountainous areas now represented by the Cheviot and the Southern Uplands hills.

As part of this project, a 450m thick section (a sedimentary log) has been measured and sampled through a coastal exposure of the Ballagan Formation near Berwick-upon-Tweed. A core of 500 m from the borehole drilled in April-May 2013 will be measured and sampled, and compared to the succession exposed along the coast. Together, these two measured sections will provide a framework to locate known and new fossil discoveries, to select samples for further analysis and to correlate the isolated sections exposed on riverbanks and in quarries. This framework ensures the different datasets can be linked together to provide a full interpretation of the depositional environment. 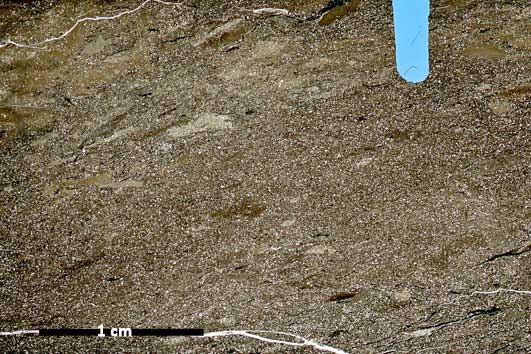 One of the bone-bearing microconglomerates in a thin section. Copyright Sarah Davies 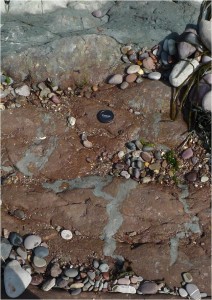 The Ballagan Formation is characterised by a lithology known as a ‘cementstone’ and the ongoing analysis has recognised several different types (facies) of these carbonate – predominantly dolomite – cemented units. The cementstones include microconglomerates, laminated and bedded sandstone and siltstones, soft-sediment deformation structures, gypsum, homogeneous micrite and pedogenic features. Pedogenesis is not only associated with the cementstones but horizons with root traces are distributed throughout the section. More than 45 separate horizons and 5 different pedotypes have been recognised to date. These include a few forest soils and possibly waterlogged soils.

Common microfossils identified from some of the fine-grained samples are plant, fish, charcoal and bone, with rarer ostracods, shells and megaspores. Observations from thin sections of mudstone samples indicates that there are many microconglomerates in the section, with around 30% containing macrofossils, including potential bone material. These observations indicate that fine-grained sediments were deposited by a range of dynamic depositional processes, contrasting with the widely held perception that mud deposition primarily occurred through settling in low energy conditions.

The ongoing analysis is revealing just how frequently the environment switched between river floodplain and river channel settings. Periodically river-derived floods submerged the floodplains and generated extensive shallow freshwater lakes. There is an intriguing alternation between lakes and fossils soils, the first requiring very wet conditions, while the other, with gypsum nodules and horizons, formed in much more arid times.

Systematic descriptions and interpretations of these successions using available and newly-generated data enable the development of facies models that will address all aspects of the depositional system. Using the palynostratigraphic framework generated from the borehole core, the isolated sections through the Ballagan Formation from locations across Scotland will be linked together in a model that will honour the regional variability of terrestrial ecosystems. When combined with data from other consortium members, the model will provide a sound basis for reconstructing the terrestrial ecosystems.