In August 2012, Tim Smithson, Jenny and Rob Clack spent a week in the Borders, visiting Burnmouth to look for fossils and also touring most of the other sites Tim and Stan had discovered. Tim pointed out a bed with some fossil bones visible and they collected some material from there.

For part of the week they were joined by people from Leicester University and the British Geological Survey in Edinburgh, many of whom had never been to Burnmouth before. Following on from this visit, Carys Bennett from Leicester and Tim Kearsey from the BGS spent most of October recording the stratigraphy of the bay and taking hundreds of rock samples for analysis back in Leicester. Carys has posted information about this on the Project blog.

In mid-October, Tim Smithson, Keturah Smithson, Sarah Finney and Rob Clack spent another week in the area collecting fossils and bulk samples of promising rock, accompanied for a couple of days by Marcello Ruta from the University of Lincoln. Meanwhile, Carys and Tim Kearsey were joined by Sarah Davies from Leicester and John Marshall from Southampton, pressing on with their logging and sampling. From the National Museum of Scotland, Andy Ross, Stig Walsh, Sarah Steward and Simon Howard chose the day with the worst weather of the week for their inaugural visit to Burnmouth.

Back in Cambridge, the fossils we collected have been picked over and sorted, though there is plenty more work to do in that direction. We seem to have quite a few rhizodont fish bones from individuals of a wide variety of sizes, a few small fragments of actinopterygian fish, a few bits of lungfish and a few tetrapod fragments. There is also a fragment of eurypterid cuticle and quite a bit of plant material. 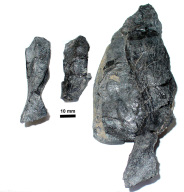