The TW:eed Team’s paper on ichnofossils (trace fossils) from the Ballagan Formation has been published in the journal Palaeogeography, Palaeoclimatology, Palaeoecology. The article is titled ‘Ichnofauna record cryptic marine incursions onto a coastal floodplain at a key Lower Mississippian tetrapod site’ and you can read the abstract online.

Ichnofossils are burrows, tracks or traces in the sediment that are made by animals. The Ballagan Formation ichnofauna is dominated by Chondrites burrows, which occurs in 128 levels within the 500 metre thick Norham Core. Also present in lesser abundance are phycosiphoniform burrows, Diplocraterion, Rhizocorallium, Monocraterion, Asterosoma? and Zoophycos? Chondrites and most of the other burrows in the Ballagan Formation are thought to be made by marine animals. Chondrites burrows represent a branching network down into the sediment which the animal used to exploit food from the sediment. Without having the borehole core to study, this paper could not have been published, as these ichnofossils are hard to spot in the field: Chondrites burrows are on average 1 mm in diameter!

The paper also describes the presence of small microfossils found within palynology slides call scolecodonts. These are the mouth parts of polychaete worms that live in the sea. The ichnofauna contrasts with the more typical burrow types (Scoyenia Ichnofacies) of other Devonian-Carboniferous tetrapod sites, which are made by terrestrial or freshwater aquatic animals. Also unusual, is that most of the burrows occur within dolostone beds. We suggest that storm surge events transported animals from the sea into saline lakes on the floodplain, where they survived for a time. But the low diversity (only a few species) of burrows present indicates harsh environmental conditions. 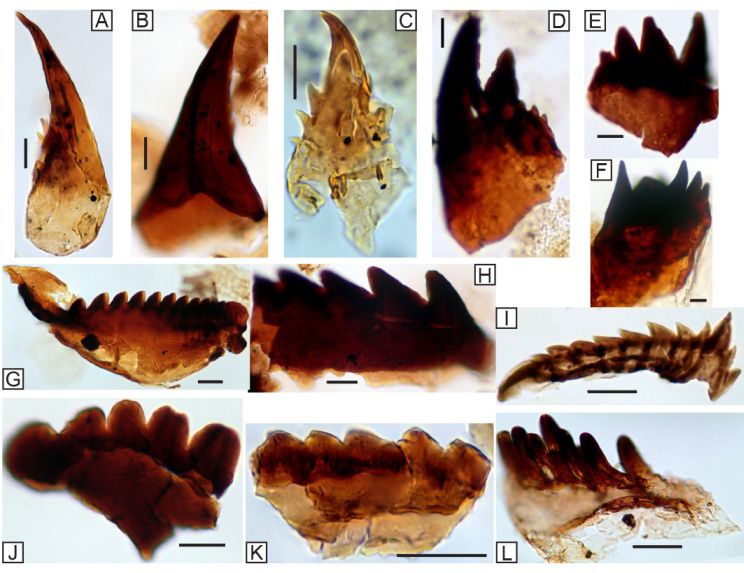 Bioturbated levels within the Norham Core succession represent a total sediment thickness of 3%, so these were unusual. But because ichnofossil levels are much more common than marine body fossils or scolecodonts, they record cryptic marine incursions that might otherwise not be found. This study helps us to understand the complex mosaic of environments present when terrestrial tetrapods first appeared.