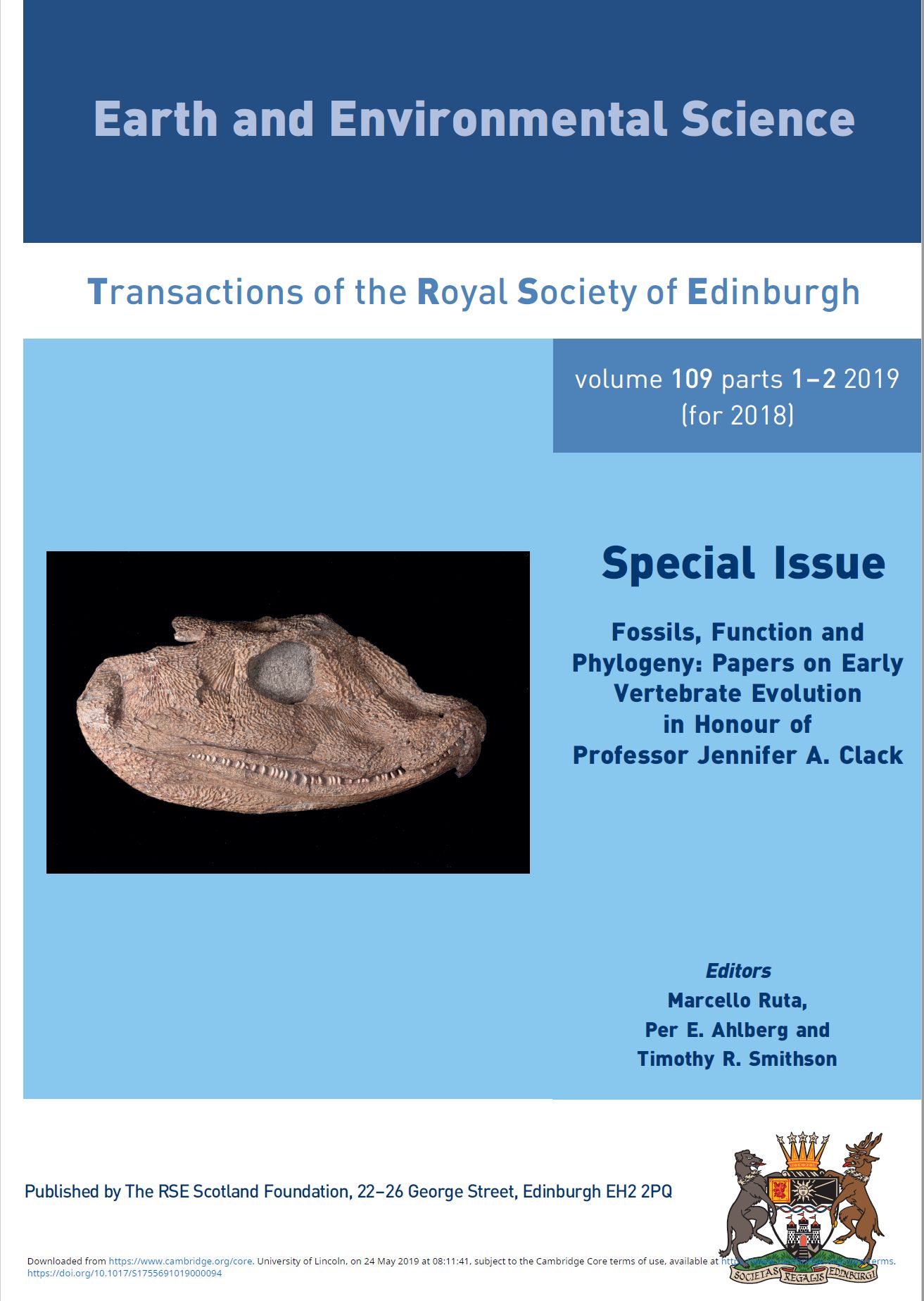 The current volume of Earth and Environmental Science Transactions of the Royal Society of Edinburgh brings together a collection of research papers in celebration of Jenny's career and achievements. The volume is entitled Fossils, Function and Phylogeny: Papers on Early Vertebrate Evolution in Honour of Professor Jennifer A. Clack and was edited by three of Jenny's colleagues, Marcello Ruta, Per Ahlberg and Tim Smithson.

Research into this area has advanced considerably in the last few decades as the result of major fossil discoveries, the establishment of evolutionary developmental biology as a central discipline and technological advances in image data analysis. The 21 papers showcase the latest work on the anatomy, biomechanics, evolution, ecology and distribution of these creatures. In all these areas, Jenny has played an integral role. Notably, two papers result from work on the TW:eed Project.

Commenting on the volume, Marcello said: "This volume is a solid testament to Jenny's scholarly influence and transformative contributions to vertebrate palaeontology. Her research has reset our understanding of the emergence of tetrapods from fish, casting light on the transition from fins to limbs and the key modifications in hearing, feeding, breathing, and locomotory mechanisms.

"Jenny is a true polymath with a keen eye for anatomical detail, a natural thirst for knowledge, and an unsurpassed ability to challenge conventional wisdom through ground-breaking and paradigm-shifting discoveries."

Per noted: "Studies of early vertebrates benefit enormously from cross-disciplinary approaches and technological innovations, especially in image data acquisition and processing. Several contributions to the volume combine traditional methods of fossil observation with advanced microcomputed tomographic scanning techniques for building 3D models of delicate fossil structures. As a result, it is now possible to make reliable inferences about the mode of development and even the size of the genome of extinct vertebrates."

"Jenny has embraced - and often pioneered - many of the innovative approaches to the study of fossil vertebrates that feature routinely in current publications in the field. Her scientific foresight is unique."

Tim added: "These are exciting times for anyone interested in the evolution of vertebrates. We hope that this volume will encourage the next generation of vertebrate palaeontologists to use these innovative approaches to add to our understanding of the interrelationships of major vertebrate groups, the links between structural, functional, and ecological innovations, and the origin of anatomical complexity.

"Jenny's work has had a major impact in all these areas but she would be the first to recognize that there is much yet to learn."

The special issue Fossils, Function and Phylogeny: Papers on Early Vertebrate Evolution in Honour of Professor Jennifer A. Clack is available at: https://www.cambridge.org/core/journals/earth-and-environmental-science-transactions-of-royal-society-of-edinburgh/issue/B7649DCA66911044B010241C00E8DA45

Sadly, there is some restriction to accessing this volume at the Cambridge Core where it resides online, and most people will only be able to see the introductory page and the list of references.