Until recently, there were only two undisputed genera of lungfish known from Romer’s Gap, plus two other genera of less certain dating, leading palaeontologists to conclude that lungfish diversity was low at that time, along with other vertebrates.

This paper, the third published by the Palaeontology Framework, is based on the study of 21 lungfish toothplates from the Tournaisian Period, most of which are new to science. They were collected in northern England and the Borders Region of Scotland over the past decade or so, many by the late Stan Wood. 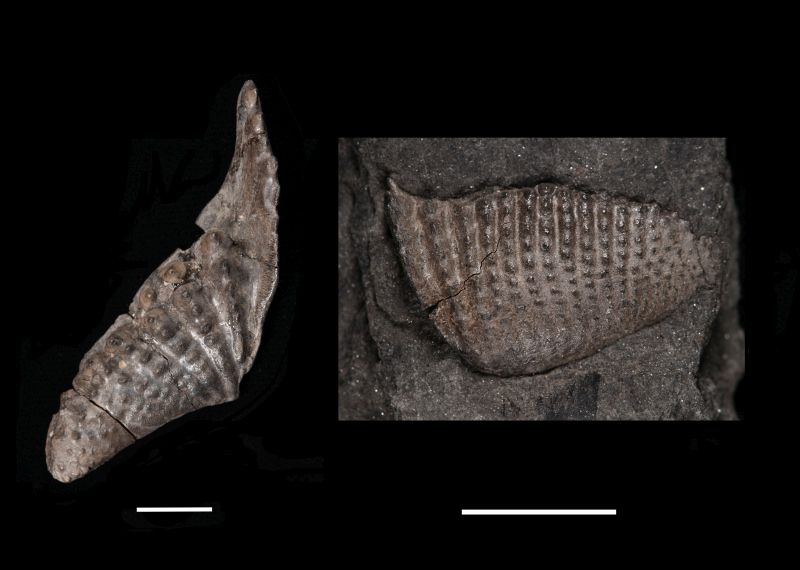 Lungfish at this time had two pairs of such toothplates in their mouths, each consisting of a vaguely triangular or rectangular plate with rows of conical teeth attached to it. Essentially, food was crushed between the two upper plates and the two lower ones. We have many chondrichthyan (sharks and rays) teeth which would have formed a kind of pavement of similarly crushing dentition, so we speculate that there might have been a lot of shellfish around for these fishes to eat. Toothplates were not shed, but retained throughout life, new teeth being added to the outside edge and new rows to the anterior margin.

The way the toothplates grew means, for instance, that you can say a toothplate with more or less parallel rows of teeth is definitely from a different species than one with sharply divergent rows.

The authors spent a long time picking through a Greek dictionary before naming and describing the following new taxa:

The high level of diversity found in this geographically restricted area over a narrow time period suggests there was a rapid and previously unrecorded radiation of lungfish in the Tournaisian. The discovery of a diverse fauna of lungfish in the early Carboniferous, displaying a mix of primitive and derived characters, challenges the hypothesis of low diversity following the end-Devonian extinction event.

The paper will be Open Access, so if you'd like to read it, it is now available.